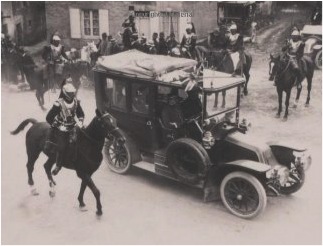 I doubt I invented the supermarket checkout date game, but I do not mind if someone wants to say I did. If you buy something for less than twenty pounds, then see if you can name an event that happened at that time. The scoring works as follows:

What is the point of this game? Not a great deal. The checkout person might look at me a bit strangely and say ‘ooh, you’re good at history’. Apart from, based on what they have heard, I am not necessarily good at history. I am good at remembering that an event happened in a certain year. What they should say, of course, is ‘ooh, with recall like that, you’re quite likely to be good at history.’

Here is what I mean. 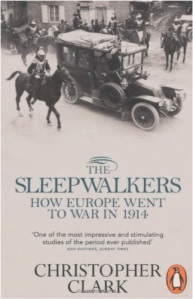 I imagine that most people reading this post have got some history books on their shelves at home. Go and grab one now and have a look at the dates in it, and what the writer does with them. I happen to have Chris Clark’s The Sleepwalkers at hand which Daisy Christodoulou recently raved about in her blog, and the book is brilliant. What is it, though, that makes this book brilliant? It is, I would argue, the way that Clark knits together all of his bits of information: a talented historian can take a period, in all its unfathomable and wonderful complexity, and they can make it meaningful for their readers.

Let’s break that down a bit further. What is ‘giving meaning to the past’, or turning the ‘past’ into ‘history’? Historians do it in many ways. They pick out causal links and they identify the consequences of events, modelling these through narratives that show how one thing led to another. They describe changes over time, characterising these changes as ‘revolutions’ or ‘developments’, whilst at the same time searching for the deep and often unnoticed continuities that lurk beneath the surface. They compare and contrast different social groups, societies and cultures, noticing the important differences and commonalities. In most works of history, these meaning-making enterprises are united in narrative, thematic analysis or some other construction.

It is dates and chronology which make all this possible. One cannot explain the causes or consequences of an event if one does not know if one thing happened before or after another. I might know about the Russians opening fire on some British fishing vessels in the North Sea and I might know that the alliance between Britain, France and Russia was called the Triple Entente, but knowing that the former happened in 1904 and  the latter in 1907 suddenly makes those two bits of information much more interesting, particularly in the context of understanding the causes of the First World War.  Similarly, whether or not one can describe a process of change depends on one having a fairly good grasp of chronology. I cannot, for example, determine the pace at which things were changing if I do not know how events were chronologically divided. Getting good at history involves getting a strong grip on dates and chronology. It is in this sense that chronology is not the same thing as history: it is what makes history possible.

The answer to my question ‘Why should pupils learn dates?’ is, therefore, that they should learn dates so that they can get better at history. It is vital to note, however, that I am not arguing that learning dates is learning history. I want pupils to write essays – which might be analyses or narratives (or are they the same thing?) – and to be able to write such essays they need to think in terms of causes, consequences, change and continuity. As a good grasp of dates and chronology is a necessary condition of thinking in those terms, then it follows logically that if I want pupils writing essays, then I want them to know dates.

I want to push this a bit further though and to expand my question to ‘what are good reasons and not so good reasons for insisting that pupils learn dates.’ It is, after all, one of the oldest debates in the book for history teachers and a great deal of confusion has I think emerged because of a lack of clarity on this issue. I should state, first of all, that I am not particularly interested in pupils learning dates just so that they can play my supermarket checkout game. Being able to recall dates simply for the sake of being able to recall dates – now in a rather tired fashion lambasted as ‘pub quiz’ learning – is not for me a good enough explanation for why pupils should learn, and I cannot think of any blogs I have read where anyone has seriously argued that learning dates is an intrinsically worthwhile enterprise: the emphasis is always on what learning those dates allows you to do.

It is here that I want to introduce the notion of quality. Generally speaking, Wikipedia history pages are packed full of dates, but they are rarely what I would consider ‘good history’. Lists of events are a useful reference and chronologies are a powerful tool, but their value lies in what they then allow you to do. Chris Clark’s The Sleepwalkers is a great work of history not just because it contains lots of dates, but because of what he does with those dates. Clark can write a compelling narrative because he knows the chronology (and other things too); a knowledge of dates is a necessary condition of writing good history, but it is not sufficient. At times in my teaching I overlooked the necessary part: trying to get pupils explaining why something happened when they do not know enough about what happened is never going to work. At times, however, I did not place enough emphasis on what I wanted them to do with their dates, and usually this resulted in dry essays that were not of a particularly high standard. Sometimes, though, I think I hit the nail on the head by integrating those things in my teaching, and the resultant essays that pupils wrote were of a much higher standard. It’s a challenging thing alright: but it is achievable

9 Comments on Why should pupils learn dates?