Mentor training day is always a highlight of the calendar in the Cambridge partnership. Twice a year, history mentors from schools across the region gather in the Faculty of Education in Cambridge, working out how best to go about training the next generation of history teachers. A panel of mentors meet in advance to plan the day, and identify issues that need to be addressed in training.

This year the mentor panel zoomed in on a common weakness in trainees’ planning. Several mentors noted that trainees were not always thinking through sufficiently well the prior knowledge that pupils needed in order to understand a lesson, and that trainees might not grasp what new knowledge pupils needed because of this. Although trainees were often quite competent at thinking about pupil second-order conceptual question (e.g. how to make a question about the causes of events harder in Year 9 than it was in Year 7), they often struggled to think about progression in terms of substantive knowledge. This was an issue which the mentors felt needed to be raised in mentor training.

One other mentor and I were tasked with putting together a session on this issue. I have included three of my slides below. Often with mentoring one of the first tasks to do it to diagnose what kind of problem it is that trainees face. I offered on my first slide of the session three common but distinct ways in which trainees sometimes failed to think through the knowledge that pupils need.

Imagine, for example, that you are planning a sequence of lessons on ‘Why did the English Civil War break out in 1642?’ There is quite a lot of prior knowledge that pupils need. For example, one cause of the war was that the king tried to raise money through a  tax called ‘Ship Money’. In order to understand why this was so contentious, pupils would need to know about how tax was normally raised and how there was a working agreement between the king and Parliament about what was acceptable. Without this prior knowledge of taxation in the late middle ages and the Tudor period, pupils are unable to understand why this particular form of taxation led to conflict. If a trainee (or any teacher) does not think this through, then pupils are going to struggle in the lesson.

I gave the mentors a quick task here, and asked them to write down a list of the knowledge that pupils would need in order to answer the question ‘Why did the English Civil War break out in 1642?’ This, of course, is just the kind of activity that a mentor might do with a trainee. I then gave mentors some categories of substantive knowledge (they added ‘anecdote’ to my four). The idea here is that a mentor might use these categories with trainees: “okay, so you’ve planned for how your pupils will have a chronological overview of the period, but where are they going to build their knowledge about the substantive concept of ‘kingship’? 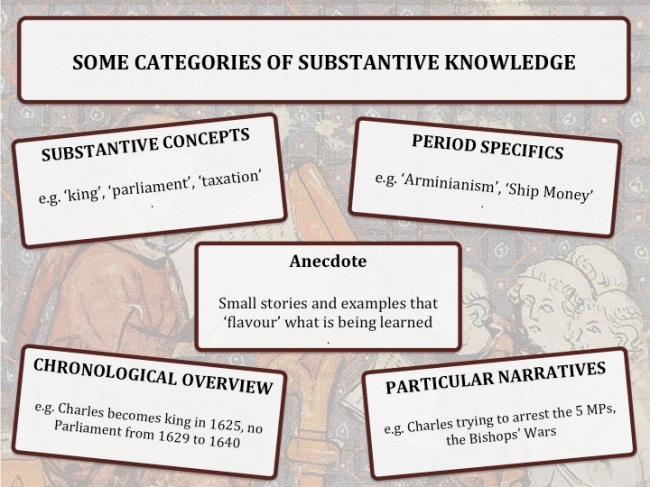 I then shared with mentors the lesson plan that trainees have to fill out: I used an example from the second lesson in a sequence answering the question ‘Why did the peasants revolt in 1381?’ As you’ll see in the ‘long-term’ and ‘medium-term’ planning boxes, this is fully focused on what knowledge pupils have, where their knowledge weaknesses are, and what needs to be done to address these.

As with all sessions on mentor training, the emphasis here is on how mentors can help trainees teach better. Inevitably, of course, reflection on how to help trainees leads us to think further about our own practice and where we need to do more work ourselves. The other sessions of the day (on assessing substantive knowledge, on memory, on ‘in-period’ and ‘out-of-period’ confusion) all made me think about my own teaching in much richer ways. This, perhaps, is why mentor training is a highlight of the year.