For many years now, politicians, the media and plenty of teachers have complained about the narrow scope of GCSE and (to a lesser extent) A-Level exams in history. In particular, the charge is often levelled – with some justification – that pupils study only Hitler and Henry VIII. In fairness, there are a number of other very common periods and places, including the Russian Revolution, 20th-century International Relations, the US Civil Rights movement and the Vietnam War. It should be noted, too, that this is not really the fault of the exam boards: all of them offer other periods – and indeed there are some schools that take these options – but, even where boards offer variety, schools generally do not take it up.

The answer is, at least in part, that teachers live in a vicious circle, rather like the one below. 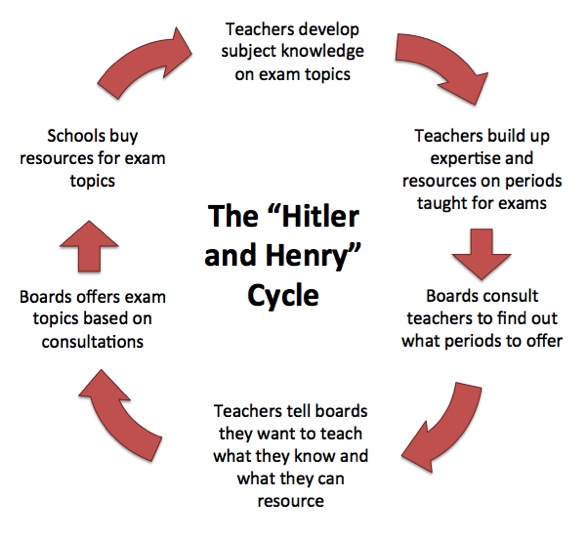 Exams work in cycles and are reviewed every few years, often at times of curriculum reform. Exam boards are of course commercial companies and they do their market research carefully to give themselves the best chance of maintaining and building their share of the market, though I have had the pleasure of meeting several people inside the boards who are also committed to making sure that what they offer has historical strengths as well. Boards consult widely, and speak to various professional and scholarly organisations but it is fair to say that it is the demands of teachers that are the key driving factor: no board is going to offer a period that teachers do not want to teach.

Now I do not wish to generalise too quickly here: I have worked with and met some fantastic history teachers who would dearly love to teach the Thirty Years’ War or the reign of Anne at GCSE. I think, however, that we tend to be cautious in making our GCSE choices. We want to make sure that we have sufficient specialist knowledge on the periods we are teaching at exam level, and it is a rare history department that can afford to invest large sums of money in new textbooks (assuming these even exist).

The result is the “Hitler and Henry” cycle, in which boards respond to demand from teachers, and teachers base their demands on what boards have previously offered.

It does not have to be this way.

One way of solving this problem is to prescribe breadth. In some ways this is the approach taken by the current government, and I think it is sensible. As I have written, the new GCSE is a big shift away from previous courses, though it is worth noting that, with the right choice of options, a school could teach 20th-century Germany, 16th-century Britain and medicine through time and still meet the specification demands.

Another, and potentially more powerful, lever is to encourage teachers to build up expertise at Key Stage 3. If schools have a good range of periods on offer at Key Stage 3, then they are already building up teacher specialism and a basic set of resources. Wallenstein and Anne become a lot less scary as GCSE periods if schools are already touching on these at Key Stage 3.

It is worth being optimistic. ‘Medicine through time’ is currently one of the most popular options at GCSE, but has not always been there. It grew because exam boards invested in it, there was a lot of training available and a number of resources – including textbooks – were released. With a little imagination, and some investment, it is possible to break the ‘Hitler and Henry’ cycle.

So Treaty of Westphalia anyone?

3 Comments on Why Hitler and Henry, and not Wallenstein and Anne?