“Substantive history is the content of history, what history is ‘about’. Concepts like peasant, friar and president, particulars like the Battle of Hastings, the French Revolution, and the Civil Rights Movement, and individuals like Abraham Lincoln, Marie Curie and Mahatma Ghandi are part of the substance of history.”1

The aim of this project was to collect from history teachers the sorts of substantive concepts – such as ‘peasant’, ‘friar’ and ‘president’ – that we want our pupils to encounter throughout their time in history education. I asked for these to be divided into words that should first be encountered in Key Stage 2, and those that should be first encountered in Key Stage 3. You can access the lists here: 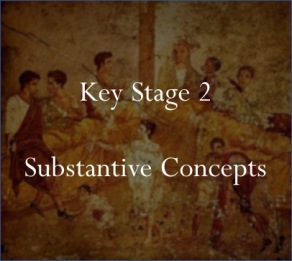 How you use this list is up to you. Some will look at this and immediately think it makes a good list for learning definitions. Although learning a definition might be appropriate for some of these words, this alone is unlikely to be sufficient. At best, a definition might be a ‘leg-up’ into the word, but one that will need a great deal of further elaboration. This means that these words need to be encountered multiple times throughout a curriculum, with each encounter adding another layer of meaning to the word. Sometimes this might work as an additional example, but often learning the word in a new context makes the meaning of the word much more complex: the word ‘revolution’, for example, is used to describe both the Industrial Revolution and the Russian Revolution, but the meaning of the concept and what it entails differs significantly between these events. This is a particularly important point in terms of thinking about the lists as ‘Key Stage 2’ and ‘Key Stage 3’. The correct interpretation of each list is “this is the key stage in which the concept is first encountered”. All of the concepts on the Key Stage 2 list should obviously continue to be used, and new layers of meaning added, in Key Stage 3 and beyond.

One of the challenges for us as historians is that the people we study in the past used the same words as we do to describe those people, their beliefs and their actions. For example, ‘democracy’ in the ancient world differed significantly from ‘democracy’ in the modern world. It is important for a student of modern democracy to know how proponents and critics of democracy in the modern era (e.g. the Founding Fathers of the USA) explicitly drew on and referred to notions of democracy in the ancient world. I would suggest that these two lists might serve as starting points for discussions in history departments – and with pupils – as to where these connections occur, and what the implications of this are for our study of the past.

Finally, this is just a list. A large number of people – some anonymous – contributed to the list, and for that I am grateful, but inevitably there are words on the list that perhaps should not be there (or which are placed in the wrong Key Stage for first encounter) and many words which are conspicuous by their absence. The list can be updated: drop me an email or Twitter message and I’ll show you how to access it, and at some point I’ll produce a second edition.